Share the news far and wide! Resurgence, the first book in my new Cobalt Rose series, is now available!

Kristin Glasco, dedicated first officer aboard a corporate bulk trader, was content to ply the backwater routes of Duscinda Sector and eke out a modest living for herself, her dream of commanding a ship of her own well within her reach. But when she’s betrayed by the people she trusted the most, Kristin is left penniless, unemployed, and with a mark on her record that would assure she would remain that way.

When her brother is mysteriously murdered while investigating a series of vessel disappearances near their homeworld, Kristin is reluctantly drawn into a dangerous game of politics and piracy where she can’t trust anyone. But she’ll have to trust them, because without the felonious crew she’s been assigned, she’ll never be able to avenge her brother or keep the ship she’s just been given command of—the Cobalt Rose.

It’s a race against time as Kristin navigates space pirates, politicians, and nefarious crime lords as she attempts to locate the information on the lost ships and her brothers’ killers before the lives of everyone in the sector are altered forever.

I’m excited to announce that Resurgence, the first adventure in the new Cobalt Rose series, is set for release on August 31, 2019. 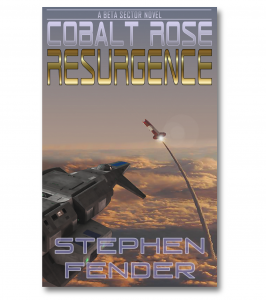 Set in the distant future, when interstellar commerce is commonplace, and the Unified Government is preoccupied defending the frontiers of charted space, unchecked acts of aggression threaten to upset the delicate trade routes that span the backwater corners of Beta Sector.

When Kristin Glasco’s brother is murdered while investigating a series of mysterious vessel disappearances, she’s reluctantly drawn into a dangerous game of politics and piracy where she can’t trust anyone—especially her own crew of the Cobalt Rose.

Resurgence is the first book in the new Cobalt Rose series. If you’re looking for an action-packed story with exotic locations, snappy dialogue, and larger-than-life heroes and villains, you’ve come to the right place.

Resurgence is available for pre-order on Amazon now.